P1 Group has typically acquired business based on the merit of the work performed and considering we have been going strong for 102 years, the system seems to be working.

But ultimately, it’s very competitive out there, and a good relationship can tip the scales in one’s favor.

“My job is to build relationships with the AEC community - contractors, engineers, and architects.  I have a marketing function as well, so I go and create greater awareness about P1 while building relationships with existing and prospective customers,” Tim said.

“The ultimate goal is that these relationships will give us more opportunities to win work.”

Tim started his career in Houston as a wine sales rep, but later moved to Kansas City to work for power tool company Stanley (formerly Dewalt). Initially he worked in the Home Depot division, but then moved into the field division where he called on many major contractors, including P1.

When Tim came in as Business Development Manager in February of 2018, it had been several years since someone was fully dedicated to this role.

“Coming in I was pretty much starting from scratch, so I decided to hit the ground running by utilizing a lot of the relationships I developed while selling power tools,” Tim explained.

“I love this job because I get to be myself, kind of a human ice breaker. I get to go out and make a friend,” Tim said. 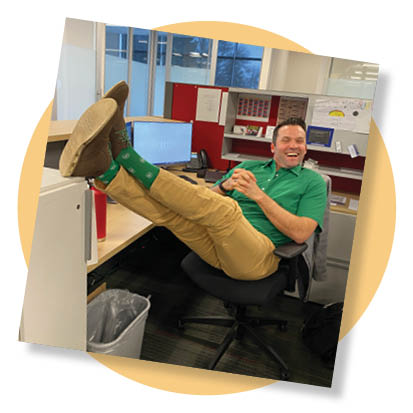 And Tim’s gift for putting people at ease is an advantage, he says, for breaking down certain barriers.

“When people are at ease, they tell you things they might not say if they weren’t comfortable, and that is a great way to start identifying where we can improve, and how we can better work with this person or company,” he said.

Tim schedules a lot face-to-face meetings, just to get to know people and gain a better understanding of how we might work together, hopefully uncovering mutual opportunities.

“Since our field staff can’t be in two places at once, I try to support our technical experts by bringing opportunities to the table,” Tim said. “Then we decide as a company if it makes sense for us to pursue them.”

So far, the process seems to be working well and Tim feels P1 has gained some ground, but along the way he has also discovered that one of the biggest obstacles in obtaining work is the lack of knowledge about P1 and what we do.

“We assume that everyone knows all about us and they don’t.  If they don’t know what we can do, they can’t ask, so we need to teach them,” Tim said.

It was out of this need to educate the customer that regular tours of P1 fabrication shops in Lawrence, KS, were born.

Tim invites representatives from companies who may know us well in one or two ways, but may not be familiar with all the aspects of our business.

Tim says that with the fab shop tours, we are able to demonstrate all the single-source capabilities without having to be on a job site. It gives him the ability to highlight what P1 can do, and allows the customer to see it in action.

“It is one of P1’s crown jewels. We get to show off this sophisticated facility with all its sophisticated equipment and it’s very impressive,” Tim said.

Tim adds that, without fail, new opportunities will come across his desk from someone who has been to a fab shop tour and now knows our capabilities - and that makes it all worthwhile.

He also realizes there are no guarantees for work based on the relationships he is forming, but feels that his efforts are at least getting P1 into conversations we weren’t in before.

He believes that if he keeps putting forth the effort it will pave the road for future opportunities.

“It does take little extra time and effort to get to know someone personally,” said Tim. “But that extra effort is what helps differentiate us from our competitors.

"I want to build a culture of being proactive with our relationships to give P1 an edge over the competition that will last into the future.”

Tim is good at building relationships largely due to of his easy-going nature and a great sense of humor. He might be one of the most social people at P1, and you can often see him manning the beer cart or participating with great enthusiasm at various Culture Club events.

Father of two sons, Charlie, 11 and Eddie, 7, and one daughter Polly, 9, Tim and his wife Mary even keep the holidays fun with their crazy Christmas cards, a tradition they’ve been doing for five years.

“My youngest son Eddie really hated to get his picture taken, so attempting to get a nice family photo was always a challenge,” Tim recalls. “In 2015, we decided to succumb to the frustration of the moment and send out a Christmas Card with a photo that illustrated the reality of life with kids.”

The card was such a hit with all their friends and family, they decided to keep up the tradition.  Now they send out around 200 cards each year and even picture-shy Eddie, and family dog Tootsie, are enjoying the fun.