What do you do when your 500-ton capacity silo needs to be modified from a tapered, oval shape to “true round”? It’s not something most of us will ever face, but it’s exactly the type of challenge P1 Group Millwrights are highly trained to solve.

When Central Plains Cement in Sugar Creek, MO, needed to change the shape of its 500-ton capacity silo to accommodate a new material, P1 Group was chosen as the prime contractor to design, fabricate, and execute the modifications of the silo and also allow the install of a new 34,000 lb. flange-mounted rotary feeder.

First, the 24 ft. diameter silo had to go from a tapered oval shape discharge to a true round discharge.

“The facility wanted to run Kaolin, a clay like material, in this silo,” Marques said. “This new material holds a good deal more moisture than the previous. The new feeder install will help prevent the bridging of material inside the silo.”

If the bridging issue is not prevented, Marques said it can collapse inside the silo, causing thousands of pounds of material to slam to the silo bottom, leading to a major safety hazard to personnel and equipment.

P1 Group was able to take control of the initial design and project planning from the beginning, which Marques says eliminated complications with the install and rigging of materials.

“The fabrication of the silo was designed in such a way to allow for a safer, more efficient way of install,” Marques said

Without the skill and attention to detail Millwright General Foremen Andy Lister and Wes Trammell brought to the table early on, the project may not have been as smooth.

“This project really allowed the skill and leadership of our millwright general foreman to stand out. During this project, like most we perform, we engage with our foremen at the early stages of the project to identify possible road blocks and hazards to the project,” Marques explained

If working with a 500-ton, 24 ft. diameter piece of equipment wasn’t enough, the location of the install presented an even greater challenge

“The silo is tucked up into a building with very little access,” Marques said.

Of course the team had a solution, executing the challenging rigging and install of the new 34,000 lb. flange-mounted rotary feeder.
“We installed additional service rails to handle the rigging of the demo, new silo sections, and the new 34,000 lb. feeder,” Marques said. “Scaffold was also installed and modified several times to accommodate the demo of the silo bottom and install of new sections.”

P1 Group Millwrights are trained for challenges on both large and small, very precise, projects, making them yet another asset to P1 Group’s single-source facility solutions. 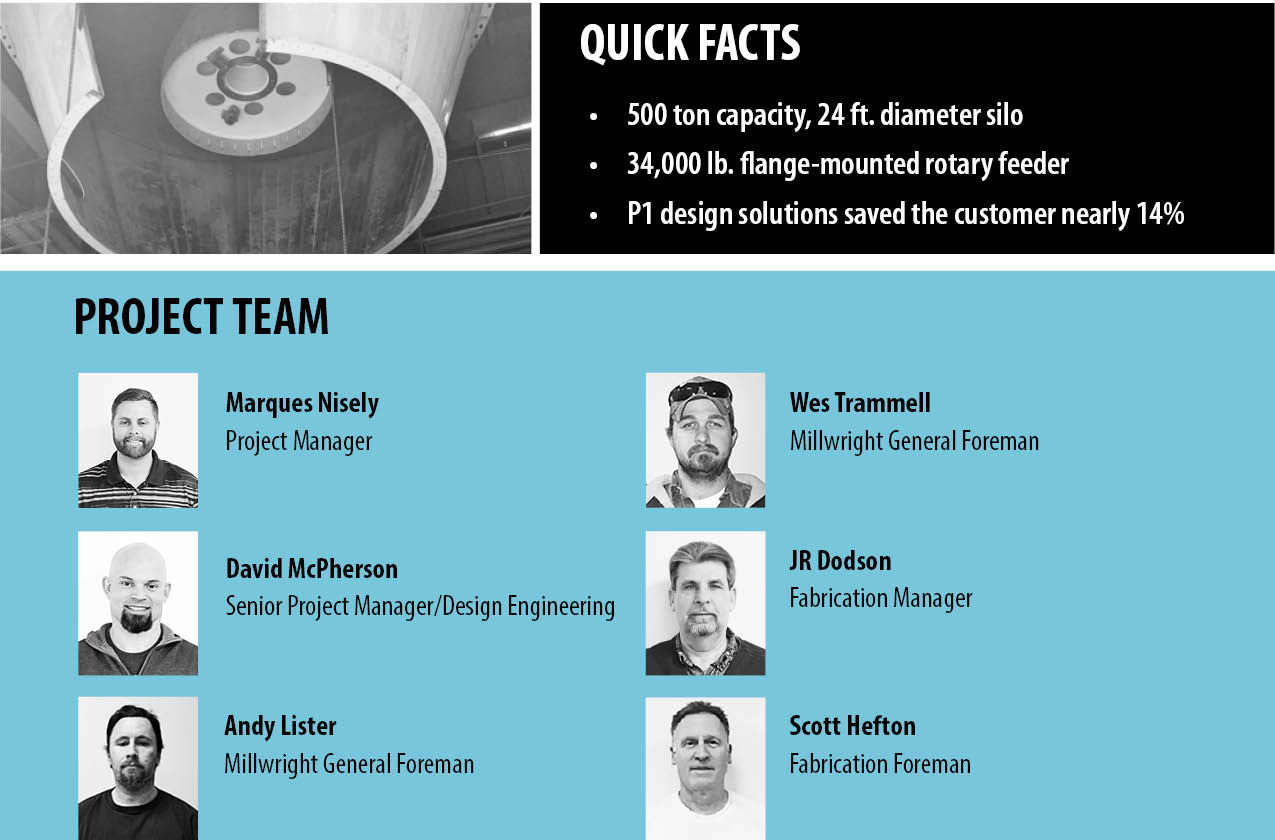