There’s a First Time for Everything.

Such was the case in a major modular fabrication project P1 Group took on in partnership with Modular Design +.

The project was for the The Los Angeles County + University of Southern California (LAC+USC) Restorative Care Village, and consisted of the multi-trade modular fabrication of 76 various “rooms”, all performed within the P1 Group fabrication facility in Lawrence, KS.

Aside from some prototypes, this was the first major modular fabrication project for P1. The units included bariatric bathrooms with showers, staff bathrooms, shared office rooms, single resident rooms, and laundry rooms.

Jason says one of the greatest challenges the team hit right away was the non-repetitive nature of the units, which prohibited our ability to truly develop a “manufacturing” style of construction.

“Getting the BIM process lined up from drawings to actual fabrication was a challenge,” Jason said, “mostly because the units were not repetitive.”

“With modular, you expect the units to be somewhat repetitive, allowing for the work to be done assembly-line style. The only repetition on this project came building-to-building.”

In other words, once the team built the full 19 units for building A, they would build the same 19 units again for B, C, and D.

“We expected to cut it, roll it along, wrap it and start the next one. But in addition to the different type of units, some of the units had false walls, which took away the option for assembly line,” Jim said. “The units weren’t sturdy enough to roll so we had to work on each one in place the whole time.”

The team also had to juggle changing scopes of work coming from a remote construction site where things weren’t moving at the same pace as the fabrication shop.

But even with the challenges, the P1 team found their groove.  Considering how many trades were working together, that’s saying something.

“We were getting more and more efficient as we built,” Jason said. “Even though we had all different trades working back there, you never saw a division. I was really impressed by the cohesion.”

And the team had hustle, even though they didn’t know it.

“For awhile, we were really under the gun in terms of getting things knocked out – so we did,” Jason said.

“Toward the end, the construction site had to tell us to stop sending the units for awhile because they couldn’t take any more!”

Jim says the quality of the product produced was also impressive.

“I think we turned out a great product,” he said. “I don’t think you’ll ever find a stronger-built unit. They were incredibly structurally sound. We probably undervalued that in our estimating!”

Approaching the estimating differently is just one of the many things the team learned as they successfully surmounted the challenges in this learning curve.

When all was said and done, Jason and Jim also agree they’d do it again.

“We figured a lot of things out. Maybe not everything, but if we were able to pull that off with no repetition, building 76 units between January and May, we could certainly take on a more traditional modular project.”

“When we got down to the end, I thought, we could definitely do more of these,” Jim added.

“We’d do them differently, but I guess that’s the point of ‘the first time’.” 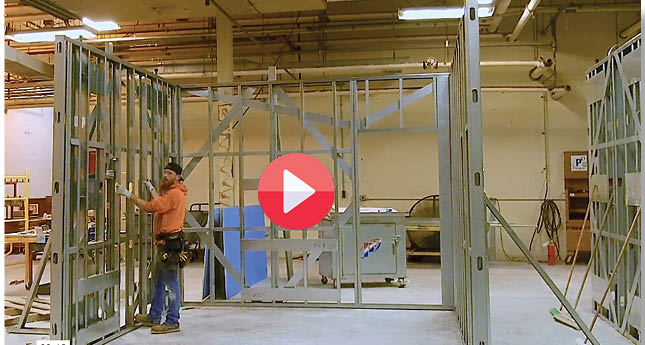 Facebook Twitter LinkedIn Pinterest Reddit
Tags:
Cannon Design LAC+USC Restorative Care Modular Fabrication P1 Group
Why We Do What We Do: Building and Protecting Life...
Now on Spotify! Get in the Holiday Mood with P1 As...

Why We Do What We Do: Building and Protecting Life-Changing Research

Going Where the Technology Is (Part II) P1 Building Technologies