P1 Group happens to share our 100th birthday with an integral component of our industry: the hard hat. One of the earliest pieces of personal protective equipment (PPE), the hard hat paved the way for the safety innovations companies like P1 Group pursue every day.

Where did the hard hat come from? The very ­first hard hat was inspired by the helmets worn by WWI soldiers, which protected them from the hail of bullets.

One of those soldiers was Lt. Edward Wheatley Bullard. Impressed by the effectiveness of the helmets, he invented the ­first commercially available industrial hard hat, called the Hard Boiled Hat®, initially designed for miners who were subjected to falling rock or tools dropped by workers higher up.

Take a look at the evolution the hard hat has seen over 100 years, then join us in saying “happy birthday”, and thanks to Edward Bullard for his vision to improve safety and quality of life for our workers. 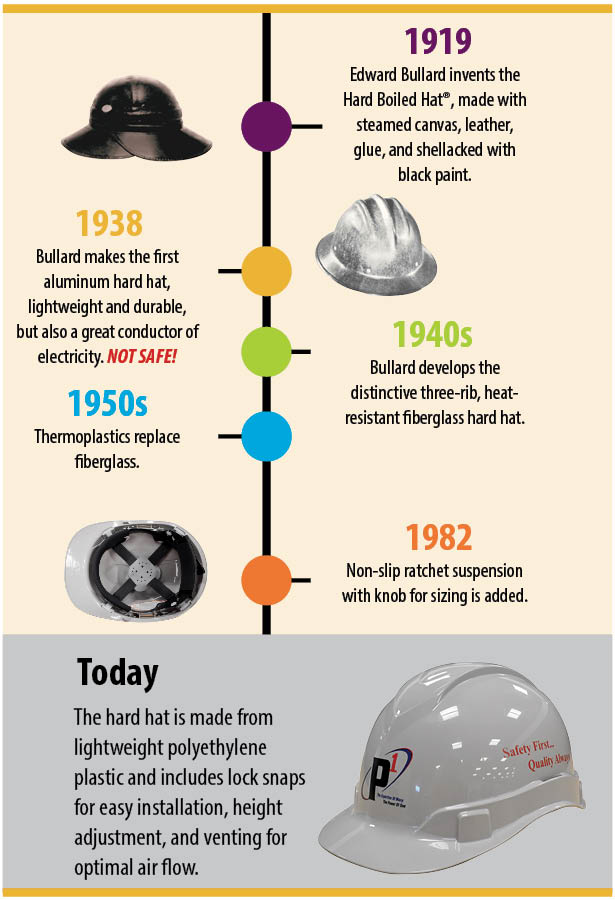 According to P1 Group Vice President Don Campbell, “Listening to the field workers is critical. We learn from what they tell us so we can continuously improve our equipment.”

Safety equipment is only effective when worn correctly. Users have to be comfortable and have the right product for the job.

SAFETY GLASSES: Years ago, after noticing workers were repeatedly removing glasses due to fogging, the Safety Department found FX4 technology, with extreme anti-fog properties, and changed over. The glasses were a hit and are still used in the field today.

HARD HATS: Full brims are critical to providing face protection, but some workers find them cumbersome and turn the hat around, or the hats don’t accommodate face shields for welders. P1 eventually found Pyramex, a vendor who provides face shield hard hats, and made the investment.

GLOVES: Don says over the years P1 tried out dozens of glove types in the field before finding the right one, and we still continue to change as better gloves come on the market. Mandatory cut-resistant gloves have drastically reduced hand lacerations. In fact, P1 was one of the first in Kansas City to go with a “100 percent glove” requirement.