His skill for building things and curiosity about how things work not only led him down an entrepreneurial path, it also helped him find his career at P1.

When a sheet metal union friend told him he might have a knack for sheet metal work, James began the career path that would lead him to the P1 Virtual Design & Construction department.

James spent four years in the field. “During my apprenticeship, I pulled double duty going to night school for construction management,” he said. “I wanted to understand more about the business and how it applied to my work.”

The transition from field to technical office work wasn’t easy.

“When I first started, it was a little bit of a culture shock,” James said. “I was still an apprentice, but now in the office, doing a job I was completely unfamiliar with.”

But James says the VDC team has been a great bunch of mentors, and he is extremely appreciative of their patience over the past few years.

“A lot of people who had more time in the field and industry mentored me and helped me learn,” he said. “They had to be patient, tell me what I was doing wrong, and then show me how to do it right.”

When it comes to the projects he works on, James says his favorite part of VDC work is being able to see a more holistic picture of the job at hand.

“When I’m detailing, I see so much more of the job.”

No doubt seeing the “big picture” played a role in James’ latest venture, taking the typical rolling cooler and “amping” it up to create a top-notch user experience.

From this, AMPD was born, a business James hopes to grow in the next few years.

One of the starring features of the high-end AMPD cooler is the marine-grade speaker system built in, making it a “radio” cooler.

“I probably made my first radio cooler about 10 years ago,” James said. “I saw people with radios, even people taking jobsite radios on float trips.”

Knowing both coolers and music are usually a necessary accessory for all those fun activities, like float trips and tailgating, James thought creating a high quality version of both, in one place, made sense.

“You can easily pair your device to the built-in 500-watt, concert-quality sound system via integrated Bluetooth connection,” James explained. “It’s a lot of power.”

The AMPD website also promises an “interchangeable Lithium Ion battery system and capacity to hold over 48 cans of your favorite beverage”.

While you can Google a “radio cooler” and find existing products, what sets AMPD apart is the top-notch quality of all the critical parts.

Right now, James is working with existing retail brands for parts – like using Yeti coolers - but fitted with AMPD’s own contributions: marine speakers, marine amp, and Milwaukee batteries – although you can also use other name-brand batteries you may already have.

James says his ultimate goal is for AMPD to manufacture their own design, complete with using their own molds, but that’s probably a year or more down the road.

He is currently partnered with a large IT firm to help him get the cooler out as a promotional product, mostly focused on businesses who can use the cooler at events.

In fact, he just built a custom-wrapped P1 version, pictured, above.

“We hope to get partnerships with organizations like Milwaukee, Anheuser-Bush, Red Bull, and Monster Energy,” James said.

But for now, James, his wife Amanda, and their two daughters Valerie and Vada, are enjoying the extra product around the house! 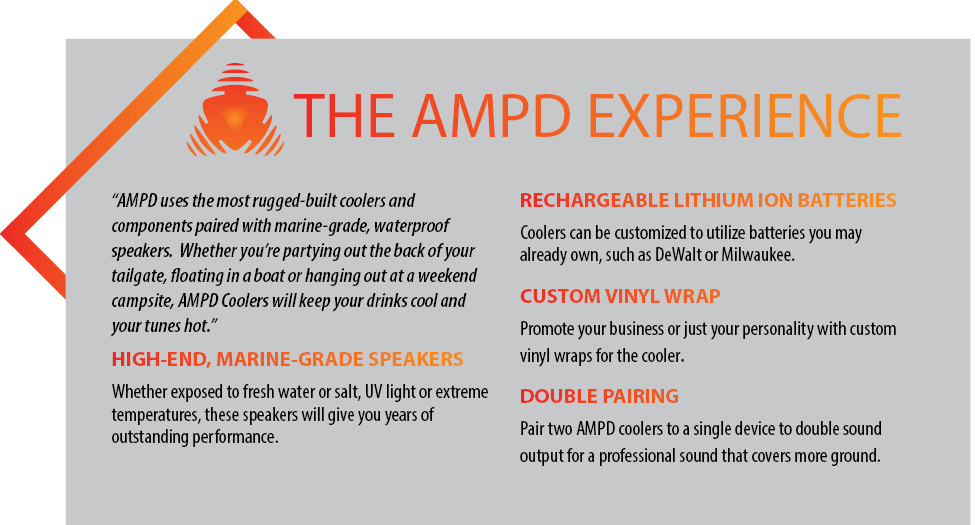 The Future is Now: P1 Group VDC Takes Technology to the Next Level with Mixed Reality Trimble