Over the past few years, the St. Joseph office staff and field personnel have worked hard to gain traction in the small community, and it hasn’t been without challenges.

Heather Richards-St. Clair took over as General Manager of the branch in 2018, and noted that 2019 was a difficult year.

“We had new team members. Everyone was trying to get into a groove with one another and work toward more efficient processes,” Heather said.

COVID didn’t help matters in 2020, which started out slow. But toward the end of the year, business really picked up. The office did three quarters of their revenue in the last quarter of the year, rebounding from the slow start.

It takes a village, and the cohesiveness of the entire office was beginning to have a positive impact, with some specific highlights.

One of those highlights was the addition of Senior Project Manager/Sheet Metal, Bryce McClurg.

Heather explained that winning contracts on HVAC replacements had been a sticking point in the St. Joseph area because P1 had to give sub quotes, and the General Contractors influence very competitive, low margin opportunities.

The addition of Bryce brought sheet metal capabilities in house, and, with his 25+ years in the industry, it also brought many key relationships. This has already made a huge difference in acquiring jobs.

“It has opened up a market that previously wasn’t available, and allowed us to move away from bidding through the GCs,” Heather said.

“By branching into HVAC replacements with a total MEPS (Mechanical, Electrical, Plumbing, Service) package, we have increased our margins and now can often bid direct to the customer,” Heather added.

“Now, we are specifically targeting large public HVAC projects that invite only mechanical contractors to bid.”

This capability led to landing one of the office’s largest contracts – multiple HVAC upgrades with the St. Joseph School District - a contract value of $4,381,743.

On the electrical side, business tapered down in 2020, but according to Senior Project Manager/Team Lead Jason White, the flood gates opened in 2021, and everything is happening at once.

Jason attributes the thriving electrical business to long-term customer relationships - such as GEM, Inc. and Cargill - that have been built, and nurtured, over the years. Those relationships are really paying off.

Jason notes there has been a significant amount of work with GEM Inc., at the Clarios plants in St. Joseph, including process and electrical controls work, along with work at GEM plants in North Carolina and Toledo.

Global food corporation Cargill is using P1 for electrical upgrades in their facilities all over the country.

Cris’s work there proved P1 does quality work, so Cris used his relationship to convince Gray to entertain a budget number from Project Engineer Jeremy Miller for a single plumbing project. It turned into a $55,000 contract.

Jeremy was promoted early in 2020, and credits much of his success to his mentors, Cris and Jason.

He particularly notes how impressed he is with their ability to juggle multiple jobs in multiple states, all with successful outcomes.

“It’s amazing the amount of time it takes, and the coordination between these two and the field guys, to make these multiple projects finish successfully,” Jeremy explained.

“I learn every day from them on how to work their projects.”

In addition to project management, the field crew is knocking it out of the park, and Jeremy says a combination of leadership, appreciation, and support fosters that performance.

“Leadership they trust, communication, materials, and the support that they need to do the job is what drives a successful field team,” he said.

Jeremy makes an effort to meet with them frequently so they have clear communication and know he is there to back them up.

“The field guys are happy where they are, because they feel valued and appreciated,” Jeremy said. “I try to convey that to them every week, if not daily. They take ownership of their projects and step up every time.

“Since I have had to be away for training, I have really relied on them a lot and I couldn’t be happier with how they are performing,” Jeremy said.

Proactive Solutions Consultant Karley Pearl came on board in 2020. Karley had St. Joseph roots, and that has helped P1 open doors they couldn’t open before.

“Small towns can be very close knit, and suspicious of outsiders,” Karley noted.

“I find I personally know many of the people I meet with,” Karley said. “So when I say I believe in this company, they believe me. They are willing to give us a chance.”

In 2021, to date, Karley has increased the P1 Service maintenance base by $150,480, adding some long- targeted customers to the service portfolio. These include Kawasaki Motors, ICM, and Hillyard, all expected to produce valuable opportunities on the service side of business.

The St. Joe office is justifiably proud of its current progress, and they understand it hasn’t been just one area or person, but a total group effort.

“It was all a matter of getting the right resources in place,” Heather said.

From the friendly face at the front desk to the talent in the field, it all adds up to future success. 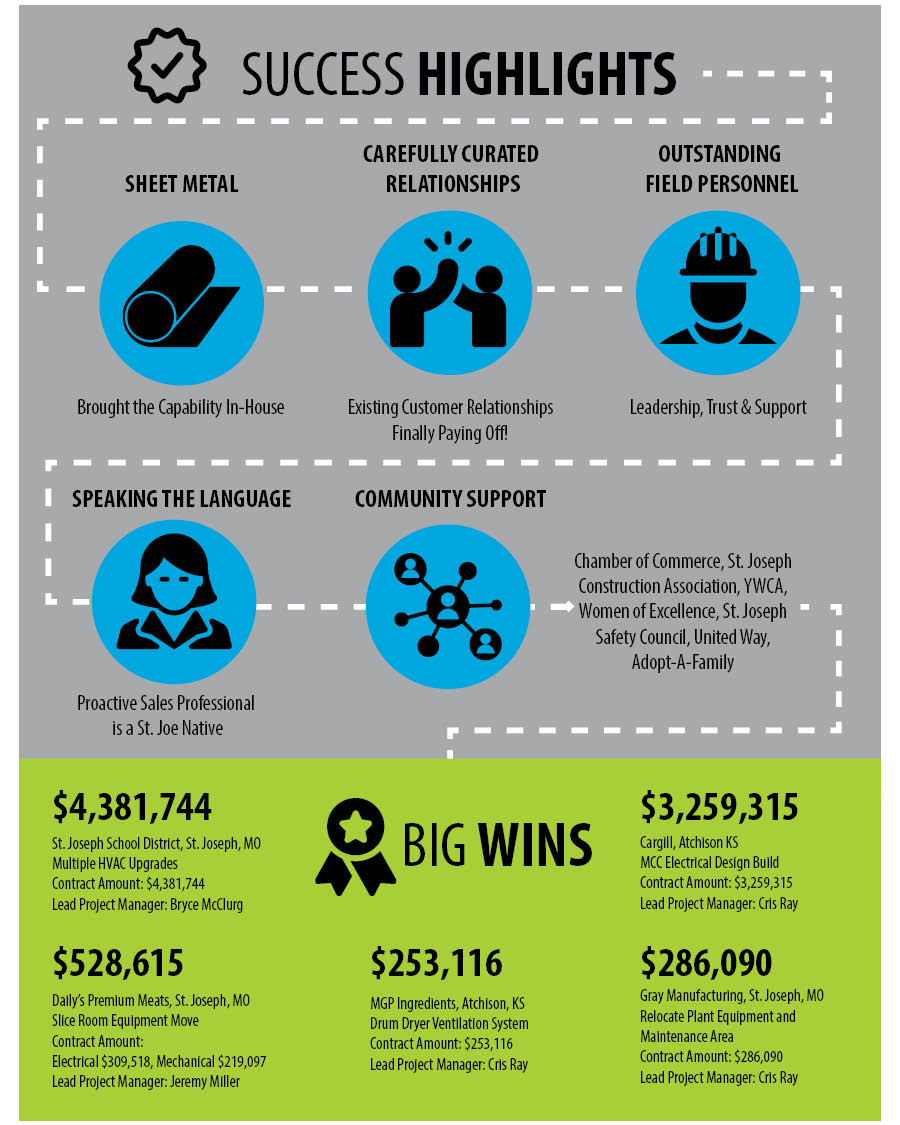