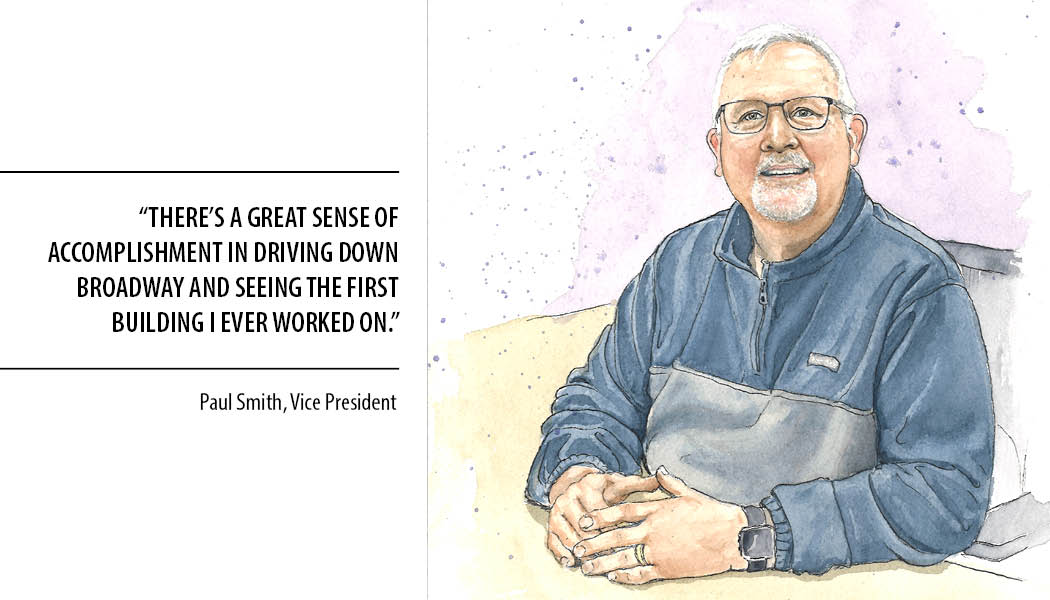 Paul Smith is retiring after 38 years of service to AD Jacobson and P1 Group.

Vice President Paul Smith can recall his very first job at P1 (then AD Jacobson Company) – right down to the exact day.

After nearly 38 years with the company, that’s pretty impressive.

It was the old Panhandle Eastern building at 31st and Broadway in Kansas City, MO. On June 20, 1983, Paul began what would become a long and distinguished career with P1.

“There’s a great sense of accomplishment in driving down Broadway and seeing the first building I ever worked on for AD Jacobson,” Paul said.

And Panhandle was just the first of many buildings, relationships, and projects Paul will never forget.

The iconic Stowers Institute for Medical Research was one of those projects.

The sprawling, state-of-the-art medical research facility south of the Country Club Plaza in Kansas City, MO, was home to many projects for P1.

The largest Stowers project consisted of more than 30 miles of pipe and was worth more than $40 million. The project spanned about three years and won an Outstanding Mechanical Installation Award from the Mechanical Contractors Association of Greater Kansas City.

Starting in 1997, Paul served as project manager for Stowers over the years, overseeing many of the successful P1 construction projects. He maintained the account until just a few years ago, when he handed it over to Project Manager Jason Larsen.

What Paul remembers most is the partnership that made the initial construction project a success.

“Initially we helped build the main research tower,” Paul said. “It was a very unique building, and built in half the time any other facility of its kind had ever been built. This was due to the efforts of the Stowers family partnering with JE Dunn, P1 Group, and Broadway Electric (now ECA).”

This was a big deal, considering HCA Midwest is Kansas City’s largest network and healthcare leader, with seven hospitals in the system.

Like any good leader, Paul knew when it was time to pass this feather in P1’s cap on, and Senior Project Manager Eric Affolter took the helm in 2010.

Paul can still recite the job number for another of his favorite projects: 21160, Nevada Regional Medical Center.

Nevada was a large healthcare job outside of the metro, which was unusual for P1 at the time.

“It was fun to manage this project, watching a rural hospital turn into something state-of-the-art.”

In fact, P1 continues to keep in touch with Nevada in the hopes we can provide equipment upgrades and maintenance in the future.

As for change, Paul is no stranger to watching it happen.

“Fabrication and electronic communication have really been the factors that have changed the most for P1,” Paul said.

“When I started, we had no fabrication, and only two people in detailing. We’ve grown exponentially in fabrication and virtual design and construction.”

But he notes there is at least one way in which P1 hasn’t changed.

“We still have a hometown construction company feel, with a family atmosphere. We always have, from the early days at AD Jacobson,” he said.

Paul hopes P1’s approach in partnering with Dunes Point Capital on Best in Class Technology Services (BCTS) will allow us to keep that culture in place, even as it opens a lot of opportunities for upcoming talent.

“At one time, our younger talent went as far as they could go until people, like me, retired,” Paul said. “Now, we’ll be able to grow horizontally, which opens up vertical opportunities.”

What will Paul remember and cherish most about his time at P1?

“Oh, the people, for sure. The friendships, and the support, have been invaluable,” he said.

In addition to the project managers and engineers, Paul says he couldn’t operate without P1’s stellar support departments.

“They give us the infrastructure to do what we do, and they’re the ones who don’t get the accolades.” “But they’re here, working just as hard, if not harder, behind the scenes.”

“The guys and gals I’ve worked with on my current construction team are top-notch,” Paul said. “I never have to worry about anything – things get done, and done right.”

Paul especially values his relationship with the executives, Kollin Knox in particular.

“Working for Kollin is working for someone who knows when to be a boss and when to be a friend. And that’s an unusual thing,” Paul said. “He’s always been there whenever I needed anything, personally or professionally.”

“This company, this industry, this 43-year career that I’ve had - it’s been my life, and it’s been a great one,” Paul said.

“It has provided me and my family more than I could have imagined.”

“I have wealth in things non-financial: the friendships and, above all, the ability to go home every night and lay my head down with the feeling I’ve really accomplished something. That is the beauty of the work we do here.”

Paul’s accomplishments are far too many to capture here, and although he says his time at P1 has given him so much, the feeling is mutual.

P1 thanks you, Paul, for everything you’ve given us. Your impact on colleagues, customers, protégés, and friends is a legacy worth leaving.

Words from the Wise

For all the up-and-coming talent at P1, Paul has three suggestions.

“Technically, Paul reported to me on paper, but I’m not big on organizational charts. The only reason I mention it at all is to make one thing crystal clear: I’m confident I learned considerably more from him than he ever learned from me. I’ve been very lucky to have an individual like Paul to whom I could go “when the chips were down,” when I needed a volunteer for a charitable event, when I needed input on a change in strategy, when I needed a different perspective in dealing with a personnel challenge, or when I simply needed a friend to listen. I struggle with seeing a man of Paul’s caliber leave our ranks, but above all, I am extremely happy for him as he begins the retirement he so richly deserves.”

"Over the 30+ year’s I’ve known Paul, we have completed multiple floors of remodels in numerous hospitals, and worked on every area/department within most local hospital systems. Paul has been my ‘go to’ guy at P1 for as long as I can remember. Charles Brandon introduced me to Paul decades ago, and since then he has been a mentor, friend, and confidant. He is the person I rely on to make sure the job is completed to the satisfaction of the owner, LCI, and P1. Anytime I work with Paul, I know he’ll be honest, forthright, and treat everyone he encounters with integrity and respect. Paul, my friend, you have worked hard, paid your dues, and now it’s time to rest, relax & enjoy your hard-earned retirement!”