The Way Things Work: Engineer Swapnil Shende Turns a Love of All Things Mechanical into a Successful Career

P1 Project Developer Engineer Swapnil Shende grew up in the small city of Nagpur, India, where he loved playing sports from his early youth, going on to play cricket and baseball in high school.

Swapnil also loved watching robot and transformer movies, an interest which proved to be instrumental in forming his career path.
After high school, he moved to the city of Mumbai to attend the Technological Institute and study Electrical Engineering.

“I chose electrical engineering because growing up, we experienced a lot of power outages and it made me curious about the way things worked,” Swapnil said. “I also grew up watching robot and transformer movies and they got me interested in working with robotics and power generation,” he said. “So my major was geared towards industrial robotics with electrical power and distribution.”

During school, Swapnil was working in a power plant, learning how distribution and transmission works, but knew he eventually wanted to work in the area of energy efficiency and electrical design at the building level. He graduated from the Electrical Engineering program in 2016, and was hired as a software engineer due to proficiency with logic and programming. Working as a cross-platform application developer, he helped create applications for Android, Microsoft, and Apple phones, along with some web development.

“Coding wasn’t what I really wanted to do, but opportunities were slim at the time, so I decided to pursue graduate school in energy efficiency so I could get into that field,” Swapnil said.

He applied to universities abroad and decided on Northeastern University in Boston, Mass., where he moved in 2017.

At Northeastern, Swapnil entered the Master of Science in Systems Engineering program, specializing in energy systems which is connected to HVAC, building energy efficiency, and energy modeling. He graduated in December 2019, and the following months proved a difficult time to find work, with many potential employers cancelling interviews due to Covid 19. He discovered P1 Group on LinkedIn, and applied for the position of Energy System Analyst Engineer. Human Resources called and he interviewed through video calls with P1 CEO Smitty Belcher and Vice President Dave Beebe.

He was originally hired to work in energy analytics with P1 Group’s SetMetrics energy simulation platform. While he still does some of this work, he transitioned into the position of Project Development Engineer, working with the P1 Performance Solutions Team, in February 2021. Swapnil said what he does now is completely different than energy analytics and, according to Vice President Rusty Roderick, Swapnil is a very quick learner.

“He came in as an electrical engineer but has picked up the fundamentals of mechanical engineering very quickly,” Rusty noted. “He has also become efficient with the auto CAD program, and has recently been an integral part of several large projects.”
Swapnil says he loves his job because of the variety of projects he has to work on.

“One day I’m designing steam boiler systems, the next day I’m doing an air distribution system for a locker room, and another day working with a health care system’s double unit installation and design,” Swapnil said. “The diversity of all the projects I work on keeps it very interesting.”

He says that every system is different and every site and location has different parameters which keeps the work challenging.

“It keeps me motivated because I am learning new things every day but most importantly, I like taking on challenges to figure out solutions for energy efficiency and sustainability. This is how P1 gives our customers the best recommendation to solve their problems.” 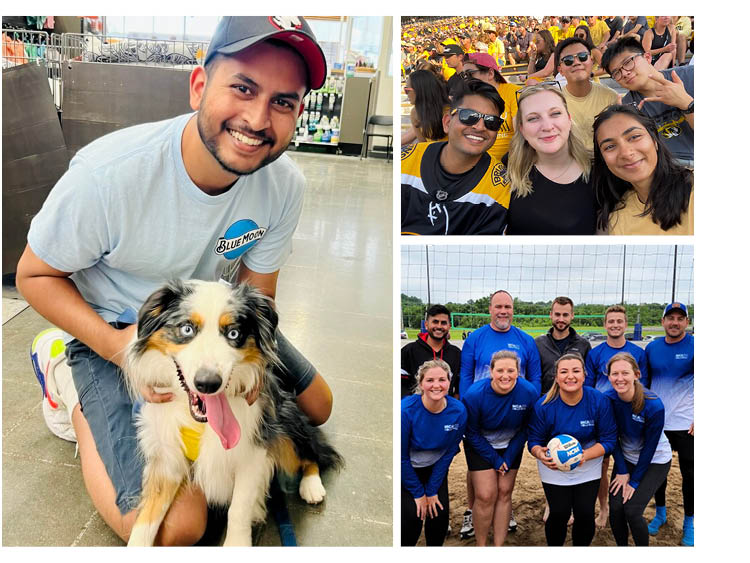 Picking up and moving to another country might seem intimidating to some people, but it didn’t stop Swapnil from becoming involved and making new friends.He is active in the Mechanical Contractors Association (MCA), and The American Society of Heating, Refrigerating and Air-Conditioning Engineers (ASHRAE), and plays on several sports teams including soccer, volleyball, and softball.

“When I’m not playing sports, I like to watch them, especially European soccer, American football, and hockey,” he said.

He also makes time to spend with his girlfriend and friends, and go hiking or travel when he can. With all of that, he’s also kept on his toes by an energetic addition to his family – Australian Shepherd “Gray”, who keeps him plenty busy.

Get in Touch With Our Team