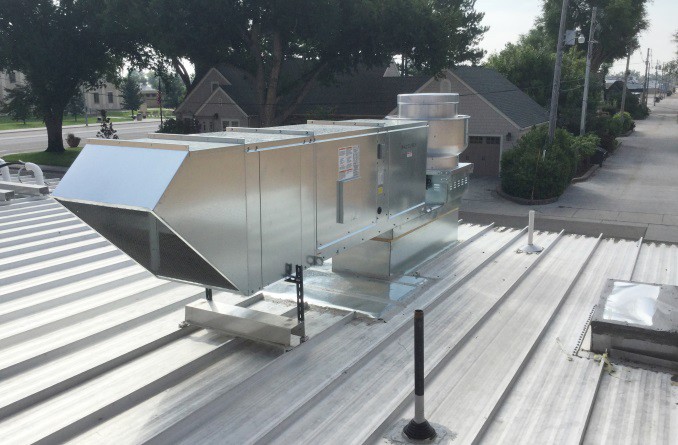 When class is dismissed for summer, P1 is working fast to complete school projects.

Main image: One of the most significant changes in Lakin Elementary's kitchen will be unseen by most people - the new kitchen hood exhaust and makeup air unit, which will alleviate air leakage issues.

Each summer, P1 Group has at least one significant school project to complete on a compressed schedule. As August 1 got closer, P1 school job crews put in the extra work to finish, making sure buildings are ready for students and teachers to return.

The week after classes ended for the summer,  P1 began a large kitchen remodeling project for Lakin Elementary School. Lakin, population 2,400, is in the far southwest corner of Kansas, approximately six hours from Lenexa and three from Wichita.

The Performance Solutions team won the Lakin project after hosting educators at P1 headquarters in November for a workshop on deferred maintenance and performance contracting. The workshop was part of the Kansas Association of School Boards BOLD (Business Operations Leadership Development) program, for new and aspiring school superintendents.

“When we removed the old walk-in refrigerator,” said Bill, “the walls around it crumbled on us and needed to be rebuilt. We worked quickly to resolve that and everything is ready for when the new walk-in arrives to be installed.”

But, generally, the project has gone well and P1 has included some extra touches after talking with the school’s cooks.

The Lakin Elementary project is just one more example of how much P1 Group values each customer, and is ready to do what's needed to deliver customized solutions.

Scope of Work for the Nine-Week Project: