Jeff says he originally became an electrician because enjoys working with his hands. He finds great satisfaction in doing something tangible, so it is no surprise he also spends his leisure time in an equally fulfilling manner.

Not only is Jeff a skilled electrician, he is also a highly skilled musician and spends his free time playing the guitar and writing music.

He learned to appreciate music at an early age. His brother, Jeff’s elder by four years, was already a drummer by the time Jeff was born. When they were little, they would pretend to be Alex and Eddie Van Halen.

“I got my first guitar at seven years old. It came from what used to be the JC Penney Outlet at 75th & I-35 in Overland Park, KS,” Jeff said. “It was a bright red electric guitar and absolutely awesome. I paired it with a little RadioShack amplifier and my brother and I set out on our musical journey of parental terror.”

After receiving that guitar, Jeff proceeded to figure out how to play it. He said he would pick it up and see what sounds he could make with it.

“I remember early on figuring out a finger placement pattern and finding the sound pleasing. I later learned it was a D chord. It should have been named the Jeff chord!” he said.

After that, learning to play consumed a majority of his free time. He acquired many instruments over the years and has become proficient on guitar, bass, piano, and drums.

“All the instruments are self-taught and I play by ear. I’ve taken a few guitar lessons over the years, however my knowledge of theory is limited,” Jeff said.

He taught himself to play by listening so he’s familiar with a lot of other people’s music, but writing his own music is his true passion. He feels the act of creating something is more enjoyable than learning what someone else did. He describes it as the combination of melodic pleasure and mathematical discovery.

“You can take the same three chords and write hundreds, if not thousands, of songs that are all different due to the patterns. The instruments present endless opportunity to create with finite materials. That’s fascinating to me and its grip has never let go,” Jeff explained.

His musical passion has been fueled by a variety of styles and genres. He fondly remembers listening to “Happy Together” by the Turtles, on his Fisher Price record player, but was also influenced by his older brother, whose tastes were more toward heavy metal.

“As I got older I began to like Dave Matthews because he’s a fantastic songwriter with a unique playing style,” Jeff said. “But I enjoyed a combination of a lot of different music, like Tool, Helmet, Rush, The Police, Dave Matthews Band, Chicago, The Doobie Brothers, and Phil Collins, to name a few.  My favorite genre and artist will vary by the day and my mood.”

Now he says his style is a mesh of all of it and he loves playing both acoustic and electric.

Although music consumed a great deal of his time, he decided not to pursue it as a career because he said, when weighing the options, his pragmatic side prevailed.

“I’ve come to value things like reliable income, healthcare, and overall stability. Those facets are seldom associated with career musicians in my experience. Perhaps it’s a copout, but I would also never want to push music to the point where it feels like work,” said Jeff.

So what does the future hold for Jeff’s music? He wants to continue playing as much as possible and share it with his sons in hope that they derive the same passion and joy. 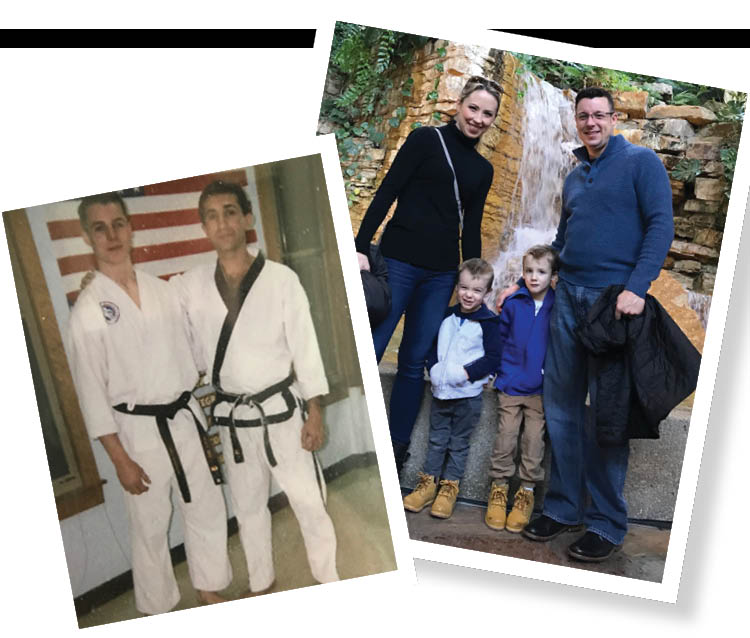 Jeff has been married to his wife Jennifer for 11 years. “She’s amazing and proof that at some point I was, in fact, a good salesperson,” he said. They have two boys, three-year old Tristan and five-year-old Hayden.

Jeff’s interests range beyond music. “For a good part of my life, I’ve also had an interest in martial arts,” said Jeff.

He began learning when he was 12, and is in pursuit of his 3rd Degree Black Belt. However, he has put that on hiatus since his P1 Group colleague, Project Manager Alex Van Leeuwan, urged him to take up mountain biking.

“He’s been gracious enough to take me under his wing as a very experienced rider,” Jeff said. “So far it’s been a blast!”

Above, left: A slightly younger Jeff with a black belt in martial arts. Above, right: Jennifer, Jeff, Tristan and Hayden